Conversations for Life: and you have to reset your password with "forgot password" because all the passwords were deleted on June 6th!

Buck Jones, active as a western film star from 1913 to his death, was one of the 492 victims of the 1942 Cocoanut Grove fire in Boston. He died two days later. Despite legends saying Jones’ injuries were a result of saving others, it is now known that he was trapped and was unable to aid fellow club goers in escaping. 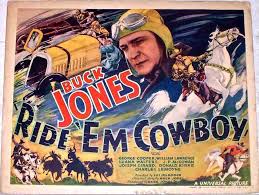