Conversations for Life: and you have to reset your password with "forgot password" because all the passwords were deleted on June 6th!

Will President Trump run for a second term?

This executive order thing that just got waved in the air like a large vote-attracting sex toy, the "National Heroes' Garden". Perhaps if it just gets called the "Inane Hate Slogan Order" instead?

I expect there's a better anagram, but it's late.
Nullius in verba ☎|||||||||||
Who has a spare two minutes to play in this month's FG Trivia game!
Top

There is one underlying reason that America is falling apart, and that's the deliberate sabotage which underlies the two-party system. I'm trying to remember when there was last an administration which wasn't hamstrung by the opposing party rather than taking turns politely and working in the country's interests.

Nobody did that to Truman or Eisenhower. Nor to Kennedy or LBJ. Nixon and Ford messed themselves up, that wasn't partisan. Carter, on the other hand, definitely was, and that's been the case for every other president since and it's happened to President Trump too.

Carter was sidelined by Reagan's dirty tricks, Reagan's mental health pushed him to the edge of his own administration so he's exceptional that way. Bush 1 committed political suicide with his foreign adventure, Clinton was deliberately maimed by the Republicans, Bush 2 won the trifecta which made his Presidency unassailable in wartime, he wasn't sidelined by the opposition, he just had absolutely no control over his own administration. Obama steamrollered the republican idiocy by sheer force of personality and blatant uprightness but they did everything they could to mess up his administration. And now we've had four years of Democrats refusing to work for America because they're not in charge. It's no way to run a country.

Car-crash America is the consequence. Truth has become an insignificant irrelevance and politicians say what the voters want to hear them say regardless of honesty or common sense. Common sense would have responded rapidly, reduced the pandemic to a level where trace and isolate would have worked. The appalling inability to now respond to events is a consequence of the politics, not of the pandemic. There are plenty of examples of successful management. Even Vietnam, of all places, hammered it flat and is keeping it that way. Being killed by people who would die for the Constitution is nothing new but this time it's domestic.

In the interest of transparency I note that the UK has so far been even less successful, but at least that was through incompetence and inertia rather than partisan civil war.

So, will President Trump still run for his second term? He behaves as though he's discovered he doesn't actually like Americans any longer, he could still just withdraw. I very much hope he doesn't, I'm far more scared of Mike Pence than I am of the President.

Can Mr Biden win in November? My money's still on a second term. I don't see that ending well at all.
Nullius in verba ☎|||||||||||
Who has a spare two minutes to play in this month's FG Trivia game!
Top

But the problem isn't who will be President, it's whether the office itself is in fact worthy of respect. The underlying failure is the Constitution itself.

When America can be totally screwed by the administrations of a succession of godforsaken idiots like Reagan, Dubya and the present incumbent, then the checks and the balances are clearly no longer fit for purpose.
Nullius in verba ☎|||||||||||
Who has a spare two minutes to play in this month's FG Trivia game!
Top

It would seem the President has finally recognized he needs to pull the nation together if he's to serve a second term. Hence the recent token mask, the new press briefings, the serious tone. And, of course, the anti-China push. Presidents are invariably popular if there's a perceived external enemy. Whether the world actually needs a War On China is another matter.

He's already withdrawn from WHO, something America can only have if he's re-elected. He could double-down and announce withdrawal from the UN with the expulsion of the organization, again with a year's notice, and that would also only happen if he's re-elected, but I bet it would be resoundingly popular across the nation.

Or China could retake Taiwan in reaction to the push push push, on the grounds that China-US relations can scarcely worsen further so now would be a good time to roll up the other outstanding issue along with Hong Kong. I can't see President Trump losing in November with an ongoing diversion on that scale.
Nullius in verba ☎|||||||||||
Who has a spare two minutes to play in this month's FG Trivia game!
Top

“There is probably nothing the same as coronavirus,” said Thomas Schwartz, a history professor at Vanderbilt University in Nashville. “Obviously, you have issues that stir the public up: 1968 would have been Vietnam and the disturbances that had taken place in the cities. But nothing quite as universal and affecting such a wide band of Americans as the coronavirus. That is really new.”


Chap seems to have forgotten the Civil War.

I note that there are 100 days until the election, we're now in countdown. The President appears to have avoided criticism at the upcoming Republican National Convention by cancelling it but that's not an option as far as the election itself is concerned.
Nullius in verba ☎|||||||||||
Who has a spare two minutes to play in this month's FG Trivia game!
Top

Here we are. From the BBC.

Gore Vidal, you'll remember (and my goodness we could do with him now!) made occasional reference to the United States of Amnesia. So, in effect, does this article.


The conversion may be insincere; may well be borne of polling necessity - but what a lot of Americans will see is their president behaving rationally and normally; making decisions consistent with the scale of the threat the American people are facing - and Americans are fearing. But, I hear you say, surely they won't forget about all those things the president said in March and April when he played the pandemic down and urged the reopening of the US economy prematurely?

Well, all I would say is that the circus moves on quickly; everyone seems to have incredibly short memories. Who talks any more about Mueller? Or Russia? Or impeachment? The beam of the lighthouse doesn't stay long in any one place. With our impatience for new developments, for new story lines, for plot twists, we seem to suffer collectively from attention deficit disorder. And this president understands that better than anyone.

Some will no doubt write that this has been the president's worst week ever. If he wins in November it will come to be seen as his best.

Will Trump go for a second term? Gawd help America if he does. And gawd help the rest of the world ! Also, it would just show that there are a super quantity of wallies in America if he gets voted in again.

It's a very troubled country, America. It criticizes other parts of the world for human rights abuses but fails, for example, to acknowledge its own penal policy as the international human rights scandal of the century. The majority of Americans fail to even see it as an issue much less a problem, most appear to take a perverse pride in it.

I'd be quite happy to see the United Nations adopt a new host nation, even at the cost of American withdrawal from the organization. I don't think America would, if push came to shove, actually resign their seat.
Nullius in verba ☎|||||||||||
Who has a spare two minutes to play in this month's FG Trivia game!
Top

G#Gill wrote: ↑
Tue Jul 28, 2020 12:53 pm
Will Trump go for a second term? Gawd help America if he does. And gawd help the rest of the world ! Also, it would just show that there are a super quantity of wallies in America if he gets voted in again.

Gawd help America? It helps me seeing you back posting

President Trump has just offered a glimpse into his mind.

"I thought her voice was an important voice, but I know nothing about her.”

Spectacular, he should have that as a tattoo somewhere.

The video prompting the President's comment was taken down by Facebook this week, leading Dr Immanuel to announce that "Jesus Christ would destroy Facebook’s servers" if the video was not restored. According to various reports Dr Immanuel has at various times declared a belief in aliens, demonic sex, bogus COVID-19 cures, reptilian overlords and Christianity. Her commercial enterprises include a church, a revivalist TV channel and several medical centers.

I shall heartily applaud if the God's only-begotten son does in fact decommission Facebook's servers before the weekend, but even that won't persuade me her medical advice is helpful.


I thought she was very impressive in the sense that, from where she came – I don’t know which country she comes from – but she said that she’s had tremendous success with hundreds of different patients.

The country you're searching for is Texas, Mr President. Dr Immanuel is the founder of Fire Power Ministries and host of a radio and television show entitled Fire Power through which she expresses her dislike of unmarried couples living together, bestiality, polygamy and "homosexual terrorism", whatever that consists of. She does all this from the medical center she owns and operates in Texas, the Rehoboth Medical Center in Houston. Her hundreds of different patients are Texans. The center is named after the third well built by Isaac when he settled in Gerar. I'm tempted to think it is perhaps the third medical center of her business empire which is very much a guess on my part, but it would echo the local Philistine population discriminating against an immigrant family at the first two attempts so perhaps she has a sense of humor. My hypothesis is bolstered by the fact that her earlier well-building was in Louisiana where being raised in the Republic of Cameroon will not have gone down well at all, the Philistines of Louisiana having a long-established belief in the divinely ordained superiority of white folk like the Good Book says.
Nullius in verba ☎|||||||||||
Who has a spare two minutes to play in this month's FG Trivia game!
Top

And sure enough, here it is. Fanfare, Confetti, Today's Presidential Tweet.


Delay the Election until people can properly, securely and safely vote???

What do you call a thing you couldn't get away with inventing in fiction but that's absolutely predictably inevitably guaranteed to happen in real life.

The one person who is never ever allowed to say what the President just said is the President. From anyone else it's just considering possibilities, from the President it's the foundation stone of The Second Republic.

Second Republics tend not to last long, they swiftly involve military factions and turn into Third, Fourth and Fifth Republics and eventually The First Empire.

If anyone would like a recent precedent of a Head of State bringing down his own Constitution in order to strengthen his own continuing Presidential powers, look up Charles de Gaulle and the dissolution of the Fourth Republic of which he was, at the time, Commander in Chief. 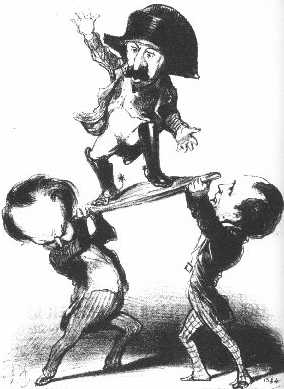